Thanks to Caelan_Elliott for showing me and the rest of the world what the New Zealand stream of Raw looked like, where they apparently forgot to cut to commercials and instead played the whole exciting chinlock (complete with referee barking instructions).

@Cultaholic @RossOnRasslin @JackTheJobber @Maffewgregg On NZ TV they forgot to play ads over the tag team match so we were blessed with 1 minute of the ref chatting with Luke Gallows whilst he had a hold on Erik and instructing them when they'd be back live pic.twitter.com/UmX4ZZxgor

2. But Never Mind That

Caelan’s technical mishap is a blip on the radar compared to the giant, glaring error from this week’s Raw.

After AJ Styles left the ring, the Preacher from last week’s Lana/Lashley segment ran in to get ready for his next segment. Except he ran in with such speed that security (who apparently weren’t clued in) assumed he was a fan and bum-rushed him.

Wait … why did the preacher guy roll into the ring after AJ Styles' match, before the Lana/Lashley segment was starting on #RAW?omit_script=1!?omit_script=1

Dude totally got chased by security, who seemingly thought he was an overzealous fan.

The cameras awkwardly looked away like in Reservoir Dogs and the segment carried on when a member of WWE staff explained he was supposed to be there.

THE BIGGEST WRESTLING COMPANY IN THE WORLD.

As pointed out by SlothFactsAsh, Jushin Liger thanked wrestlers who had passed away during his press conference. He thanks Shinya Hashimoto, Eddie Guerrero, Wild Pegasus and…Dean Malenko.

I'm pretty sure Liger thinks Dean Malenko is dead?omit_script=1 Sends a message to Shinya Hashimoto in heaven, then says he thinks other wrestlers are congratulating him too. "Eddie Guerrero, Malenko, Brian Pillman, Pegasus." The subtitler didn't subtitle Malenko lmaohttps://t.co/3EPbxcnRqS

This probably came as a shock to the still-alive Master Of 1,000 Holds.

During the last section of Andrade vs. Rey, Zelina got hit accidentally by Rey during a dive off the apron.

Both men then went into the ring to carry on their match but got told by the ref that they’d forgotten to do the bit outside the ring where Rey checks on Zelina.

And by “got told by the ref” I mean “the ref grabbed Rey from out of the Hammerlock DDT and threw him outside while yelling GO OUTSIDE.”

Andrade vs. Rey was as great as ever

even with the ref having to grab Rey and shove him outside for the convoluted finish pic.twitter.com/ps79bBvip8

As posted by Wrestletalk, it turns out after investigation by people who care about stolen valour, Sgt. Slaughter never served as a marine.

This came up on the WON board, but I'll post here too. Sgt. Slaughter was never in the USMC. While its fine that he portrays a character that was a Marine, him doing non-kayfabe interviews claiming to serve 2 tours in Vietnam, that he was a drill instructor, etc. is not good. pic.twitter.com/2XLPE1YFvl

“Yeah Matt Borne wasn’t really a clown either, duhh” I hear you type. But Slaughter would talk about his “two tours” in real-life interviews that were NOT about his character, which is a lot different to playing a character of a marine on TV.

At Jimmy All The Way (GCW’s last show of 2019) the very talented Blake Christian & Jordan Oliver had an opening sequence that someone GIF’d and tagged Cornette on Twitter for a bit of two-day drama.

Unsure why they showed the part of the match which showed off their strengths and not this bit.

Being the guy responsible for herding up a pair of local jobbers can’t be fun. I’m going to be on TV???? Oh er of course I have experience! I’ve won loads of matches, honest!

Last week on 205 Live we found ourselves facing down the barrel of two magnum jobbers: Corey Storm & Anthony Wayne. 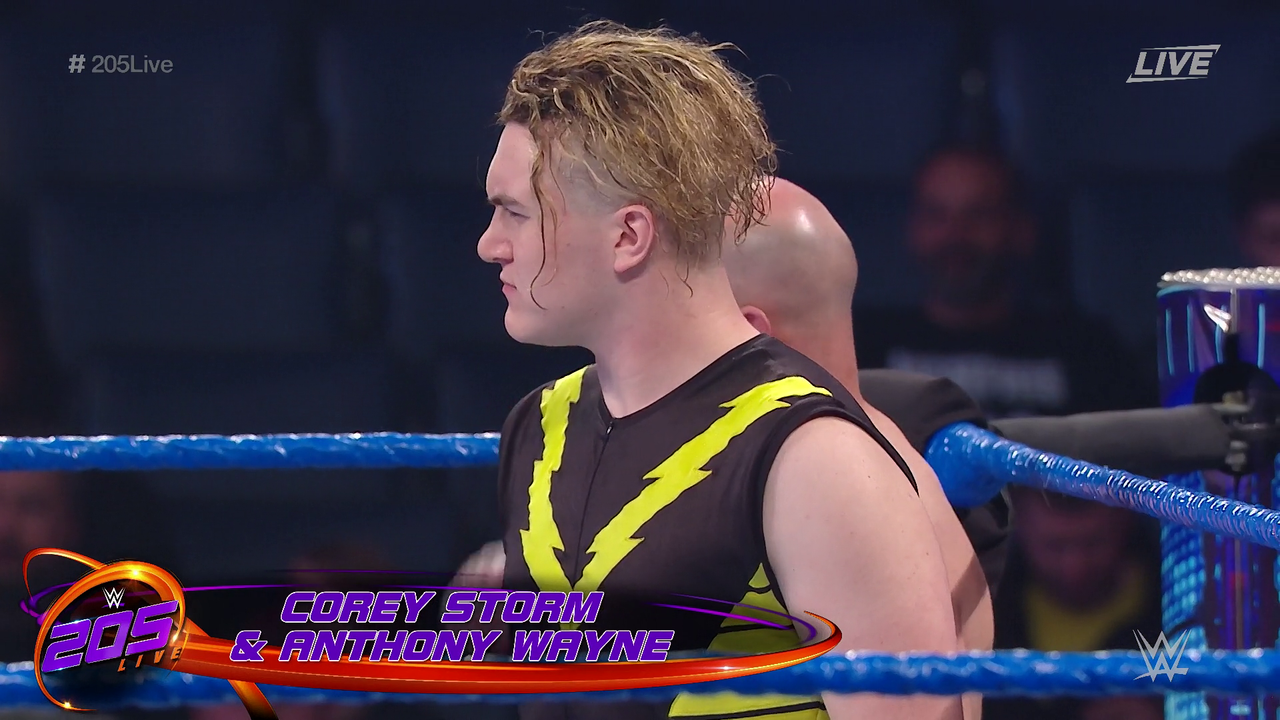 Aside from dressing and naming himself like it’s 2002, Storm was fine. Wayne however bumped and jumped around as if he was struggling to ignore the voices in his head.

Match didn’t go long (it’s a Singh Bros. match, it’s over before your Chicago Town Pizza has microwaved) so that sequence was all we got before they mercifully put him away with the Demolition Decapitation and an angry stare. 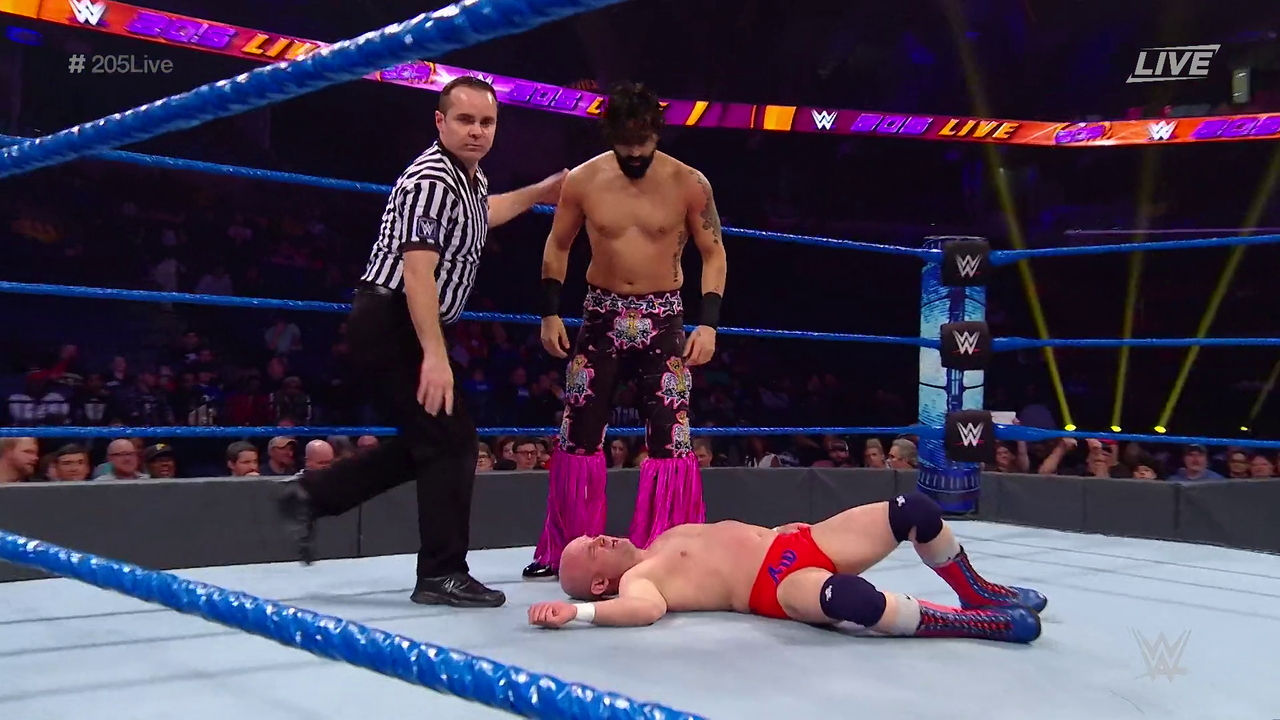 His CageMatch profile claims he’s had 65 matches across 17 years which…explains a lot.

Jon Moxley went to NJPW for Wrestle Kingdom this week, where the best of the best and the puro of the puro gather for Seven Star Matches.

And then er there was this.

Alright I haven’t looked yet but have y’all been as critical of Moxley’s phantom knees against Lance Archer as you were of the Dark Order guy?omit_script=1 I’m guessing “not a chance” right?omit_script=1 pic.twitter.com/tCMaRQfylV

Prior to joining AEW, journalist Alex Marvez proved in 1995 it wasn’t just Meltzer that was successful at annoying wrestling companies:

So of course WCW officials assumed there must have been a mole and went into panic overdrive. So the end result was booker Ric Flair changing two of the finishes (because you know if kayfabe was exposed in a newspaper in Dayton, wrestling would be FINISHED!) including the main event result.

Originally Savage was supposed to win, but Flair felt that it was super-important to protect the business by making sure that he went over instead. In fact, some people backstage suggested that Flair himself was the mole because it worked out so well for him.

Dave Meltzer would again like to stress that there is no mole and Marvez just guessed everything because WCW is stupid.

So because a journalist correctly guessed all the finishes to a PPV before it happened, WCW changed two of the finishes (“Craig Pittman submitting Jim Duggan” to “Duggan winning via DQ” and “Savage pins Flair” to “Flair pins Savage”) to spite him.

Unrelated but Marcus Bagwell was going to be on the show but he couldn’t make it due to his calf muscle implants exploding.

Update On Why Shane McMahon Is Returning To WWE
WWE Announces New Faction To Debut Tonight On Raw
WWE Title Storyline Scrapped After “Full-Fledged Man Tantrum”
Released Star To WWE: ‘I Hope You Feel Dumb’
WWE Raw Reportedly ‘Chaos From The Top’ Today
Taynara Conti: ‘I Have Been Underestimated And Unappreciated For My Entire Career’