Botches Of The Week (September 28)

Daniel Bryan wrestled Erick Rowan on this week’s SmackDown and it was going perfectly fine until the finish.

Rowan delivered his not-a-chokeslam but Bryan was too close to the ring ropes and ended up head-over-tit like the bad guy from Disney’s Tarzan.

Eventually the referee released him and then Rowan pinned him.

Matt Riddle finally defeated Killian Dain in a Street Fight this week on NXT but it was hardly a fair fight as Riddle demonstrated his Jedi abilities.

Ali continued his one-named descent into recklessness to avoid being sent back to 205 Live with a risky suicide dive onto his own head.

4. Can I Copy Your Homework?

Seth Rollins tweeted a dramatic-sounding message about his upcoming match with Rey Mysterio on next week’s Raw. 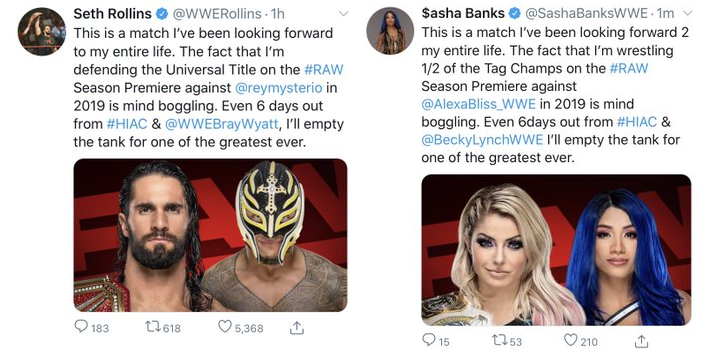 Kairi Sane showed off her kicking skills on this week’s SmackDown by missing Mandy’s Maxim Magazine.

She hit it on the rebound though. We’ve all been there.

6. Should Have Stayed Hidden

WWE continues to pump out rare AWA footage from when the company was presumed-dead such as this tag match between Madusa Micelli & Sylvia & Magnificent Mimi & Wendi Richter which ends with a….er…

I love the AWA Hidden Gems stuff on the Network so we can all enjoy moments like this pic.twitter.com/O0Vzt79OEn

“Now, this part, I don’t understand”

Jericho’s been in the news again this week due to being Drunk On Main again so let’s remind ourselves of his attempt at an armbar on a green Big Show in 1999.

8. How About A Nice Botch For A Change

Well OK fine. Seeing as it was PWG BOLA weekend, here’s the moment Daniel Bryan won the PWG Title during his last appearance for the company that caused a fan to jump the ring with emotion and celebrate with him.

He should have stretched him.

Thanks to DdtShaggy for this clip from 1997 AJW and no, I’ve never seen a ring post break either.

HERE’S VADER VS A BIN

TAKE THAT YOU STUPID TRASH.