4 months ago by Laura Cude

AEW has announced another title match for the 21 October edition of Rampage.

As revealed in a backstage clip shared on AEW’s social media channels, Orange Cassidy will defend his AEW All-Atlantic championship for the first time in a match-up with Rush and Dark Order’s Preston Vance.

The clip sees Jose The Assistant interrupting Vance’s interview at a bar backstage at Daily’s Place in Jacksonville FL, a mere 24 hours before Rampge.

Jose The Assistant asks Vance to join him their faction. Vance refuses and says he fully intends to face Rush in a singles match during Rampage.

Just as Rush tells Vance that he “better bring the fight,” Orange Cassidy emerges from under the bar and drops a duffel bag containing his newly acquired gold.

Cassidy offers them both a beer before putting his title on the line and challenging them both to match at the same time.

Recent AEW Signing Has ‘Disappeared From All Talk’

Orange Cassidy became the AEW All-Atlantic Champion during the October 12 edition of Dynamite, where he defeated PAC by pinfall.

In addition to Cassidy’s first title defence, the 21 October edition of Rampage is stacked with title matches.

The Acclaimed will be defending their tag-team titles and will try to reclaim the ‘scissor me’ trademark filed by Mark Sterling in a winner takes all match against  Josh Woods and Tony Nese.

Elsewhere on the confirmed card, HOOK will be defending his title against Daivari and Penelope Ford will face Willow Nightingale. 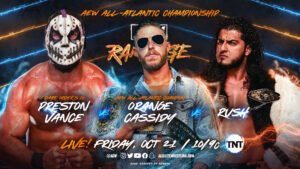 Stay on track with the results from all 2022 editions of AEW Rampage right here.