A professional wrestling free agent made his AEW debut on tonight’s AEW Dynamite in a major match.

While ultimately, Robinson was not successful in his challenge for the AEW World Championship, losing to Moxley, he was positioned strongly throughout the bout. 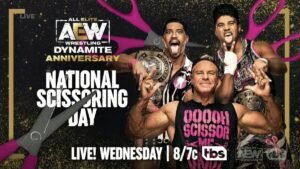 With commentary noting numerous times that Juice Robinson was a sought after free agent, there is possibility we may see Robinson appearing again in AEW.

Elsewhere on tonight’s show, Saraya declared a revolution was afoot in AEW, another from the locker room confirmed a suspected injury and MJF appeared and accepted a match for next week.

Also, tensions continued to build within the Jericho Appreciation Society before a massive tag team match was also announced for next week’s anniversary edition of AEW Dynamite.

Later in the show, Chris Jericho made a bold claim about the future of the Ring of Honor Championship after succeeding in his bout against Bandido.

AEW Dynamite airs on Wednesdays at 8pm EST on TBS.