Jeff Hardy & Frankie Kazarian To Perform At Concert Next Month

AEW stars Jeff Hardy and Frankie Kazarian are set to trade the wrestling ring for the musical stage at a concert next month.

Hardy’s band PeroxyWhy?Gen and Kazarian’s band Gutter Candy are set to perform at the Whisky A Go Go on June 2. 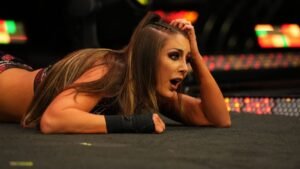 AEW Rampage Scores Lowest Viewership Ever For May 6 Show

The following press release was put out by Larger Than Life Management:

The day after AEW debuts in Los Angeles, Jeff Hardy and Frankie Kazarian will take center stage at the world-famous Whisky A Go Go on Sunset Blvd in West Hollywood.

Frankie, with his band Gutter Candy, will open the evenings entertainment with a hard-hitting set of their uniquel brand of metal, followed by Jeff, as PeroxyWhy?Gen, in a special acoustic set.

With capacity of a mere 500, tickets are likely to go fast. www.whisyagogo.com

Frankie and Jeff will both meet and greet fans after the show, signing autographs, memorabilia and taking photos.

This show is produced by Rick Bassman and Larger Than Life Management.

Both Hardy and Kazarian are set for big week’s in AEW this week, as Hardy is set for a dream match with Darby Allin on this Wednesday’s (May 11) episode of Dynamite, while Kazarian battles former tag team partner Scorpio Sky in a TNT Championship match on this Friday’s Rampage.

4 weeks ago by Ryan Coogan

Kurt Angle Names Wrestlers Who Should Have Had WWE Runs

1 month ago by Laura Cude

49 mins ago by Ryan Coogan