5 months ago by Amanda DeChene

Another major match-up on AEW for a former WWE star who seems headed to be added to the MJF and Wardlow feud.

After Wardlow destroyed the Murderhawk Lance Archer on tonight’s (April 27) episode of AEW Dynamite, MJF was asked why he was so calm.

MJF hopped on his phone to make a call, offer the unnamed “big man” on the other end of the line “six figures for one match,” and then as he got off the phone, informed Wardlow he would be facing a man who is smarter, stronger and taller than him and ended with a signature catchphrase of non-other than the former WWE star, Big Cass. 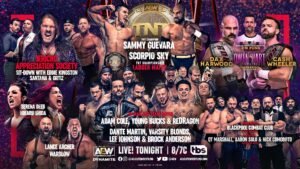 While it has yet to be confirmed, the reference seemed to very directly reference the former WWE star however as of writing, AEW Dynamite announced the match for next week as being versus a “mystery opponent.”

Recently wrestling for IMPACT as W. Morrissey, the former Big Cass, real name William Morrissey, most recently appeared for the promotion at Impact Rebellion which aired this past weekend.

MJF’s feud with Wardlow continues with the crowd being squarely behind Wardlow throughout a big series of matches including seeing him in action last week versus The Butcher and this week taking on Lance Archer and emerging victoriously.

Another former WWE star, Deonna Purrazzo will also be appearing on next week’s AEW Dynamite being announced during tonight’s episode.

.@the_MJF sets up a match for @realwardlow next week against a man who is "smarter", "stronger" and "taller than #MrMayhem.

Tune in NOW to #AEWDynamite LIVE on TBS! pic.twitter.com/OTryMACHoI

7 mins ago by Laura Cude

23 mins ago by Sanchez Taylor

59 mins ago by Sanchez Taylor

Report: Another AEW Star Wants To Return To WWE