IMPACT star W. Morrissey rose to fame in the wrestling world during his time in WWE and NXT, when he performed as Big Cass in a popular tag team alongside Enzo Amore.

The duo were called up to WWE’s main roster in 2016, where they would end up as one of the most popular acts on the show, leading them to a big match at the 2016 SummerSlam event against Kevin Owens and Chris Jericho.

Morrissey recently spoke to Renee Paquette on The Sessions, where he discussed the differences in creative between NXT and the main roster, and how those differences became apparent that night in Brooklyn. 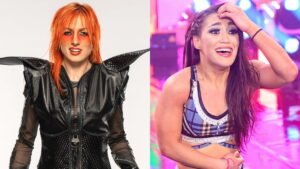 Enzo and Cass opened the show and performed a rendition of the Frank Sinatra his ‘New York, New York’, which reportedly left Triple H ‘furious’.

“I can think of one time when we really messed up. We went off-script at Summerslam in Brooklyn and sang a Frank Sinatra song. You can’t sing or imitate things that are copyrighted. That was a stern talking too. He was furious, Hunter. We didn’t know. We didn’t know those sorts of things.

“I think everything is amplified and it’s so much bigger, and the magnitude of things you do and the consequences of the things you do are way bigger. That’s something that maybe, in the moment, I didn’t realize. But you’re on live television. If you mess up or do something that can cost the company, that’s on you. It’s way bigger, it comes with a lot more money and a lot more glory, whatever you want to call it, but you have to watch yourself a lot more.”

You won’t be able to find Enzo and Cass’ rendition of the tune on the WWE Network or Peacock, as WWE have edited off the show. Morrissey explained how he, Enzo, Owens and Jericho all felt that things went well that night, until they arrived in the back.

“If you go back and watch that Summerslam, I think it was 2016, they had to cut it. That was something we weren’t told, and then I see we did it and we thought, ‘yeah, New York. We fu**ing crushed it, man! Yeah, man, that was on the fly and everybody was with it!’ And then we got to the back and it was like, ‘you! You! Come here!’ And I was like ‘f**k!’

“We came back and were like, ‘Jericho, thank you! Kevin, f**k yeah!’ We were so happy, and then the mood just completely changed, drops. And then you start to think, ‘f**k, what did we do? What did we do? We must’ve fu**ed up.’ So yeah, that was a big one. That was huge. In NXT, we might’ve been able to do that or get away with it. When we went to different towns on the road with NXT, I sang “Sherry” in Asbery Park, New Jersey. We were doing stuff all over.”

W. Morrissey seems set to make his AEW debut on tonight’s (May 4) episode of Dynamite as the mystery opponent for Wardlow chosen by MJF.