Windham Rotunda (Bray Wyatt) has opened up about his wrestling career and future in a rare Q&A session.

The former WWE star took to Instagram to answer several fans’ questions. Revealing that he has arrived in Dallas, Rotunda captioned the original post:

“I just got to Dallas. This place feels so alive, it makes me feel alive. This week in particular has always been a huge part of me. God damn I missed this energy. I missed all of you too. I’m sure some of you have questions for me. I got answers. Here it is. I’ll reply to 6 questions in the next hour. Keep in mind I hate ruining surprises.”

Rotunda confirmed that he’s in town for Wrestle Con. Providing an update on his health, he commented:

“I have never been more healthy both physically and mentally. I have been able to challenge myself with projects that would’ve never been possible before. This is a happy time for me. But I have to be patient. Timing is everything.”

The former Universal Champion stated that he thinks about a wrestling return often, noting:

“I will always love wrestling. I couldn’t imagine spending the rest of my life without stepping in the ring again and hearing that roar again. I think about it often. Everything has to be in place though. Like I said, timing is everything.” 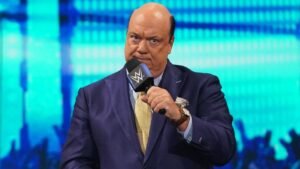 Explaining why he’s not out for revenge, Rotunda wrote:

“At first it was all I could think about. But revenge is a confession of pain. And I was hurting. I was angry. And then I healed. I remembered that every single time in my life that I have been challenged I come back better. I’m no stranger to pain, nothing has ever been easy for me, nothing was ever given. But people should know by now, you should never ever ever f**kin doubt what I am capable of.”

Rotunda also discussed the origins of the FireFly Fun House and The Fiend, revealing:

“The Firefly Funhouse, at least the early ones, are a story about my life. I told you stories in there that happened live on television and many that you could never know. It was confessions.

“They were short, stylized documentaries about my life. That’s why they connected. They weren’t just about wrestling. They were an origin story.

“What I really went through, my struggles, my vices, my comeback, and the war that wages on. I hid so much on there just because I wanted people feel when they watched. Because believe me, I had every emotion fathomable during the making of those. My life, my art.”

When asked what fans can expect from the Cult of Windham, Rotunda simply replied:

Rotunda has yet to return to the ring following his WWE departure in July 2021. His last match was as The Fiend against Randy Orton at WrestleMania 37 last April.

Stay up to date with every WWE departure of 2022 using our tracker right here.

21 hours ago by Connel Rumsey

Update On Plans For The AEW Fight Forever Video Game