Bret Hart has shared his thoughts on AEW, revealing whether or not he’d be open to working with the promotion in the future.

Hart has been referenced both directly and indirectly on AEW TV numerous times over the last few months, with Dax Harwood and Cash Wheeler paying homage to the star in their Owen Hart Cup Tournament qualifier, and Hangman Page recently noting that his bout with CM Punk at Double or Nothing won’t be a ‘masturbatory Bret Hart tribute match’.

Fans had initially speculated that these teases were ultimately going to lead to The Hitman showing up in AEW, however Hart has reportedly signed a new deal with WWE that is believed to prevent him from appearing for the popular promotion.

Speaking with Lucha Libre Online, Hart explained that he wants to be remembered as a wrestler, rather than a manager, or for a non-wrestling role. 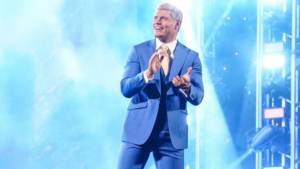 Noting that he’d still love to be ‘a part of things’ in AEW, Hart said:

“Well, I’m (happily) retired. I’m a home guy now and there’s not a lot I can do in wrestling. People say, ‘What are you going to do? What would you do in AEW,’ and it’s like what would I do? Referee? Manage? Be a chairman? It’s like I don’t want to be remembered that way. I want to be remembered as a wrestler.

“I’d be happy to help a lot of them (AEW talent) and I know a lot of them and I talk to them, a lot of them sometimes by text or on the phone and people call me up.  I always got advice and I can always pinpoint little things that can make a difference in a guy’s match or something he’s doing but, I’m a guy that likes being home.

“So they’re gonna have to call me on the phone. It’s not something I’m…I wish I could go to stuff more easily but I’m getting a lot older now and it’s getting harder for me to keep flying around and doing stuff. I gotta pick my days that I can do stuff. There are a lot of things I would love to be part of AEW and what they’re doing. I know they’ve got some great wrestlers there and I have a lot of respect for the organization and all that but, right now, I’m happy at home.”

Hart notably appeared for AEW during the inaugural Double or Nothing pay-per-view in 2019 to unveil the AEW World Championship.

Despite Hangman Page’s claims, CM Punk has vowed to pay homage to Bret and win this title on May 29 with one of Hart’s signature moves.

26 mins ago by Andy Datson

13 mins ago by Andy Datson

18 hours ago by Sanchez Taylor

45 mins ago by Liam Winnard