Brian Kendrick has commented on him being pulled from an AEW show due to controversial comments he made in previous years.

Kendrick was slated to make his AEW debut on the February 2 episode of Dynamite against Jon Moxley. Before his appearance, clips of Kendrick discussing conspiracy theories related to the Holocaust resurfaced, and the former WWE star was pulled from the episode.

On the Duke Loves Rasslin podcast, Kendrick apologised for mindlessly trying to create a buzz, noting:

“Back then, I was trying to create some sort of buzz and I didn’t care who I offended. When it gets thrown back in your face, one, it’s embarrassing, two, you’re forced to reflect on it. I’m sorry. I’m sorry for being so cold-hearted and trying to profit off of tragedy. I suppose that’s what it was.

“I was trying to gain off of other’s tragedies but making conspiracies and creating a buzz for myself to gain bookings. It was a terrible idea. Even if it hadn’t affected anybody, it’s horribly embarrassing. I am sorry for anybody…to people I hurt, for making light of stuff that happened to them or their family. I hope you accept that.

“A friend of mine recommended Survivor Mitzvah. I recommend that too. Seems to be an honest charity where the money goes directly to. My actions, as far as hoping to be kinder, if it’s a question of understanding the tragedies of the past, the truth is, I understood all that long ago, prior to these statements. Years ago, as part of WWE, Beth Phoenix and I went to Dokha. As a teenager, I went to the holocaust museum with my grandfather. I know these things.

“It hasn’t dawned on me that these tragedies might have happened, it’s stuff I knew. What I was doing was, trying to profit off of that and trying to become a villain who would make light of such tragedy. It’s a disgusting thing to do and I did it.” 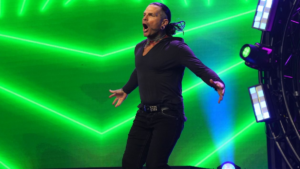 Kendrick had been granted his WWE release right before his AEW appearance was announced. Discussing the response to him losing work with WWE and AEW, he said:

“I did lose my job. I fought hard for a few months to get my release from the WWE in hopes to go wrestle, that’s what I want to do. I wanted to wrestle. I managed to get my release and get an opportunity with AEW. I had a contract and they didn’t that, at this time, it was not the right time to keep me employed. Things need to get figured out. I understand. It’s the way it is.

“These weren’t videos that were under a hot mic. I knew what I was saying and what I was trying to do was trying to offend. The truth is, at a certain point, you have to start taking life seriously and pissing people off and offending them are two different things. It’s one thing to piss them off. It’s another thing to offend them. I don’t want to offend anybody, but ten years ago, I didn’t give a s**t.”

When asked whether he’d give himself a job after his comments, he answered:

Anthony Henry Under An AEW Deal

AJ Styles Wants The Young Bucks To Come To WWE

Drew McIntyre Pulled From WWE Live Events Due To Injury