3 months ago by Laura Cude

An update has emerged regarding Chris Jericho’s reported ‘contract extension’ to remain with AEW for another three years.

According to a recent report, Jericho’s AEW deal is ‘not a contract extension.’

As per Wrestler Observer Newsletter:

“Chris Jericho signed a new contract with AEW through early January 2026 (the press release said December 2025 but it’s been confirmed it’s actually January 2026). While figures were not available, his old deal was $3 million per year and he obviously got a raise, and given the timing, likely a good raise. This is not a contract extension.

“His old deal, a three-year contract with a two year option, similar to the timing of The Young Bucks and Adam Page, was to expire in January 2024 at $3 million per year. This past week he signed a new three-year contract with a higher dollar figure (we don’t know the raise but it is a bigger contract and obviously the biggest contract of his life) that goes into effect in January 2023, essentially ending his old deal one year earlier and starting a new contract at that point in time.” 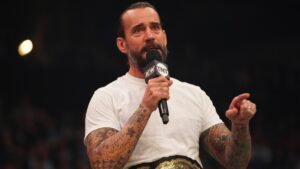 Report: AEW 'Not Looking To Bring Back' CM Punk

I guess you could say it was a contract renegotiation. Or a bargained contract replacement?

Whatever the term is, it definitely was not an extension, rather the terms of the deal will replace the existing terms, one year before the original contract’s termination date. Got it?

Chris Jericho’s deal was originally revealed in a Variety exclusive on October 18. It was reported that the Ring of Honor champion would be taking on behind-the-scenes responsibilities in addition to his in-ring role.

Jericho’s deal will see him take on roles as a producer, creative advisor and mentor to younger talent.

He commented on the reason behind his decision, saying:

“I guess the simple answer is ‘Why not?’ Things have been going so well in the company, and I really do feel that this is my company. It’s tattooed on my heart, so to speak. I’ve been here since day one, and there’s really no reason not to be here continuing forward.”

The match was the latest in a string of defences against previous ROH World Champions as Chris Jericho continues his pledge to desecrate the title.

Keep up to date with all AEW TV wins and losses of 2022 at this link right here.