Cody Rhodes Injury Update Ahead Of WWE Hell In A Cell

There has been speculation regarding the status of the Cody Rhodes vs Seth Rollins match at tonight’s WWE Hell In A Cell event, due to WWE announcing an injury to Cody Rhodes at last night’s WWE live event.

That being said, Cody shared a photo of the chairs at tonight’s show, seemingly implying that he’s still set to compete in the match tonight. However, he is reportedly working through the match injured, and it’s a pretty serious one. 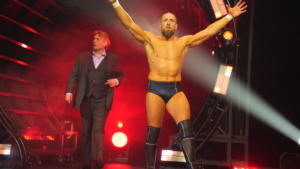 Per Dave Meltzer on Wrestling Observer Radio, Rhodes suffered an injury while weight training during the week. Meltzer said that the story going around is that Rhodes suffered a torn pec, but he was unable to confirm if that is the injury.

“Cody hurt himself weight training this week. The story going around backstage last night in Champaign, Illinois is that he tore his pec. I don’t know that 100 percent [if] that is the injury. That’s definitely the story going around. That’s what multiple wrestlers were saying last night, and Cody was there, so he probably told them,”

“The presumption everyone had was he’s working Hell in a Cell tonight and from there we’ll see. But a torn pec is, you know, that’s a pretty serious injury, if it is that.”

Cody Rhodes To Return At WWE Clash At The Castle?

12 mins ago by Amanda Savage

47 mins ago by Amanda Savage

Santos Escobar Banished From NXT After Losing To Tony D’Angelo

Cora Jade And Roxanne Perez Face Off At NXT Heatwave