Conditions Under Which WWE Board Can Terminate Vince McMahon Revealed

With the ongoing allegations lobbied against Vince McMahon, fans have wondered about his future in the company, and whether or not he will step down full-time.

McMahon recently temporarily stepped down, with daughter Stephanie McMahon taking over as the interim CEO and chairwoman, but what would it take for Vince to be terminated by the company. 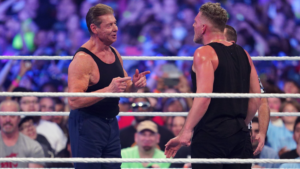 Per Brandon Thurston, McMahon’s employment agreement explains the conditions under which he can be terminated by the company, which reads as followed:

Vince McMahon's employment agreement states the conditions under which the company (i.e., the board of directors) could terminate him.https://t.co/UC4U8r1kzB pic.twitter.com/s5EZJzSN7n

2 hours ago by Andy Datson

50 mins ago by Sanchez Taylor

13 mins ago by Sanchez Taylor

Report: The Rock Vs Roman Reigns Is ‘100% The Plan’ For WrestleMania 39