AEW star Dustin Rhodes has praised the WWE women’s division and his goal to get AEW’s to the same level.

Dustin Rhodes is one of the lead coaches for the women’s division in All Elite Wrestling and a huge advocate for women’s wrestling as a whole.

Appearing on Thunder Rosa’s Taco Vlog, Dustin explained how he wants to help the women in AEW to succeed. 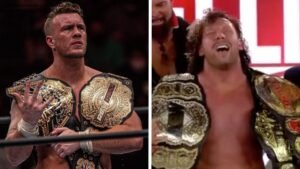 “You girls, there are a lot of people that do reach out to me here and want help and knowledge, but from day one, it started with Britt and Bea Priestley, they had a hell of a match. We started hiring more girls, I was diving in with them, and I started having training sessions just because I wanted to. i wanted the women’s division to get somewhere other than where it was at. WWE has done a good job at that, but I want to see AEW do that. It’s not because I don’t like the guys. I truly see the desire in you ladies and how you want to make it to that next step. That means a lot to me because I like the challenge to get you guys there, in any way possible. I want to lead you there because I care. A lot of people may think that’s weird, but I truly do. I found a calling and I love to train with you girls, talk to you, mentor you, listen to your problems, hug you if you’re crying. It means a lot to me,”

Dustin continued on to explain how he can use his experience to help and how the company is slowly working towards more for the women, saying:

“Some more than others, like you, you’re all working hard and you all deserve a chance. That’s important for women today. We’re always talking equality. I think it’s important. Now we have a match on Dynamite and Rampage every single week. Slowly but surely. There have been lots of main events. There have been steps forward. I appreciate that as a fan of women’s wrestling. I can sit and watch men wrestle all day long, but if it’s a women’s match, I want to see what they do, pick it apart, and fix it if it’s fixable. I’m very protective of the group. Even when we were practicing during the pandemic, someone yelled at and it was, ‘I can’t believe they did that to you, I was so mad.’ I’m like, ‘it’s okay, it’s fine,’ but y’all were taking up for me and that makes me feel good and makes me feel like I’m doing something worthwhile.”

Despite his role training the women, Dustin Rhodes has stayed active and last competed against CM Punk on last week’s episode of AEW Dynamite.

For the full results from last week’s Dynamite, click here.

14 mins ago by Ryan Coogan

26 mins ago by Ryan Coogan