A former ROH star has discussed his final match and departure from the company.

In October 2021, Ring of Honor announced that the promotion was going on an extended hiatus and all the talent would be released from their contracts. Their final event under Sinclair Broadcasting was Final Battle 2021 in December.

Since then, AEW President Tony Khan purchased ROH and has held two major events under his management.

Also, several former ROH stars have popped up in WWE, All Elite Wrestling and IMPACT Wrestling.

Speaking with NBC Sports Boston, IMPACT World Tag Team Champion Matt Taven discussed his departure from Ring of Honor and his final bout with Mike Bennett against The Briscoes. 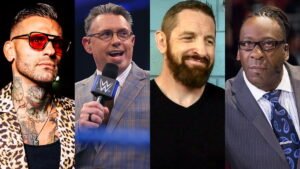 “It was a place where I really kind of set my roots and stuck my flag in the ground, and was very proud to call myself a Ring of Honor guy. It’s one of those things that it’s still not far enough in the rearview mirror to kind of wrap up my feelings on everything, looking back on it. But man, what a wild ride it is, and for me personally, my last match being in a Ring of Honor ring, as of now, being against The Briscoes at Final Battle, I can remember right before we went out there, thinking of all the, like you said, 2009 was the first time I stepped into a Ring of Honor ring and thinking of all these years that have gone by and everything that I’ve seen in Ring of Honor and everything that I’ve been through, literally starting as one of the underneath guys that is just begging to get a shot and moving all the way to being the world champion. Now I’m going out there in what could be my last match against the greatest tag team in Ring of Honor history. People constantly want to know like, ‘What’s your favorite Ring of Honor match?’ I kind of look back on it and maybe it’s because it’s the last one as of now, but I really look back and I think I left it all out there for the very last time, knowing that it could be the end, and I’m so extremely proud of that match that that’s almost one that I hang my hat on as almost like a, ‘Here’s a synopsis of my whole career here in Ring of Honor,’ and it’s summed up in this one match with us and The Briscoes at Final Battle.”

Matt Taven made his debut for IMPACT Wrestling in January at Hard To Kill alongside his Kingdom tag team partner Mike Bennett, Maria Kanellis, Vincent and PCO as the Honor No More stable.

Taven and Bennett defeated The Good Brothers to win the IMPACT World Tag Team Championships on the September 1 edition of IMPACT on AXS TV.

The Kingdom will defend their titles against Chris Sabin and Alex Shelley of The Motor City Machine Guns at IMPACT Bound For Glory on October 7.

Recent AEW Signings Say AEW Is Where They ‘Belonged’

24 mins ago by Ryan Coogan