A former WWE star says they don’t look down on their time in the Divas era.

The topic of how fans look back on this era and title has become a topic of discussion as of late, which has led to a former Divas Champion to speak out.

Melina spent seven years with WWE and won five titles during her time with the company with two reigns as Divas Champion.

Speaking on the MCW Backstage Pass, Melina discussed the Divas era and the unfair criticism it gets in her mind. 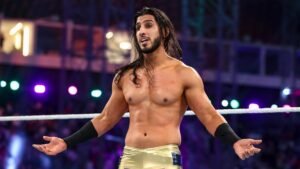 “It’s a weird thing because diva gets tied up with the model search, and that’s not it. That’s the hard part where the term ‘diva’ is thought of as model days, and it wasn’t even that. Well, kind of. But regardless, each woman who held that title did their best, gave it their all. Maybe blame the divas search, but you can’t blame them for getting an opportunity. It’s like like Tough Enough. You can’t blame the people who did Tough Enough, and that’s what the Divas Search was.”

After host Tara Meyer noted how women’s wrestling has changed a lot, the former WWE star noted that she wouldn’t want to change the era she competed in because of the unique perspective.

“I feel like I got a great perspective. I’m never gonna change and look down on my time. Everyone’s like, ‘Okay, do you wish that you were in this era because of all the opportunity?’ No, I love what I went through for the fact that, the perspective that I have.”

As previously mentioned, Maria Kanellis brought up the topic of bringing back the Divas Championship in a recent interview.

Melina last appeared for WWE in the Women’s Royal Rumble Match in January.