Jamie Hayter Vs. Toni Storm Set For First Round Of Owen Cup

On tonight’s episode (April 13) of AEW Dynamite, the first match-up in the forthcoming Owen Hart Foundation Cup Tournament has been announced.

In a backstage segment with both ladies, Tony Schiavone announced that Tony Khan had listened to fans and had made it official: Toni Storm would take on Jamie Hayter in the first round of the Owen Hart Foundation Cup Tournament.

While Jamie Hayter went on to cut an impassioned promo about how both ladies had battled in wrestling matches all over the world, much like Owen himself, Toni elected to remain silent which perturbed Hayter. 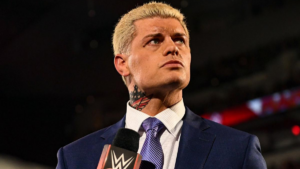 Red Velvet was the most recent qualifier, joining Hikaru Shida, Toni Storm and Jamie Hayter who had previously qualified to enter the tournament.

The Owen Hart Memorial Cup Tournament is currently announced to begin in May 2022 and will feature both a men’s and a women’s tournament to crown the inaugural winners at AEW’s Double or Nothing with plans for Dr. Hart to be in attendance at the event.

You can view all the wins/loss statistics for both the women’s and men’s AEW roster by clicking here.