Johnny Gargano has commented on his options in wrestling, teasing a match with a notable GCW star.

Gargano hasn’t wrestled since his WWE contract expired in December 2021.

Speaking with Mike Wexler, Gargano noted that there are a lot of things he’s currently debating working on, but promises to return to the ring in the future:

“I mean, all of my options are open right now, I’m very open about that. I don’t know what I want to do next. It’s one of those things where I’m kind of in a time period of my life where I’m figuring that out. I’m figuring out what my goal is, and what lasting legacy I want to leave. I do have a lot of unfulfilled things in WWE that I do want to accomplish.

“So there’s WWE, there’s AEW, there’s New Japan, there’s doing a run on the indie scene, there’s a lot of things that I’m debating working on right now. I don’t know when, and I don’t know where I’m going to return, but I promise you when I do, you all will know.” 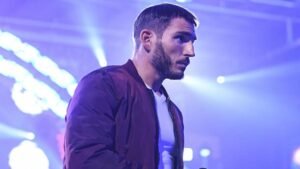 Johnny Gargano Reveals How Long He Plans To Continue Wrestling

Gargano also commented on the possibility of a GCW run, and a match with Blake Christian. Gargano stated that if fans want the match, he’d be open to wrestling the former Trey Baxter, noting:

“Blake is a guy obviously I’ve known, he was in NXT for a bit as well, but Blake is a guy that I’ve had my eye on for a very, very long time.

“I think he’s an incredibly talented young man and the fact that he uses the nickname ‘All Heart’, which, I had that nickname back in like 2005, but I’m not going to say that or anything. Anyway, his song is ‘The Bomb Dot Com’, which some people say sounds a lot like ‘Rebel Heart’ as well.

“He is a guy that I think is immensely talented and if I come back and I do a few matches here and there on the indie scene, taking on Blake Christian in GCW, if the fans would like to see that, let me know. I say all the time, and I do mean this, if you chant ‘Johnny Wrestling’, I will hear it, so you never know what could happen.”

Gargano and Blake Christian were two of the 80+ talents who left WWE in 2021. Stay up to date with every WWE departure of 2022 at this link.

4 days ago by Laura Cude

26 mins ago by Amanda Savage