Jackass star Johnny Knoxville is set for his singles WWE debut at next weekend’s WrestleMania 38 show, when he takes in bitter rival Sami Zayn in an Anything Goes match.

Knoxville recently spoke with the UK Metro ahead of his match at the stupendous event, where he encouraged fans to continue to call Sami Zayn, as he plans on retiring him at WrestleMania.

‘If you need him to clean your house or maybe give you a pedicure, he’s going to need a lot of odd jobs after WrestleMania because I’m gonna retire him…

‘I’m training a bunch and I can’t wait to punch Sami Zayn in that stupid face. I go to sleep thinking about it, I dream about it, I wake up in the morning and it’s the first thing I think about. He’s gonna pay at WrestleMania.’ 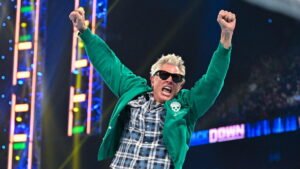 Knoxville continued on, speaking about how much he’s enjoyed working with WWE, and how he would love to do more with the company in the future.

‘I would love to come back and do something more in the future! It’s been a dream come true working with the WWE,’ he gushed. ‘It’s been so much fun, I didn’t realise I would become so completely obsessed with it like I have, it’s so fun!’

Knoxville detailed how his training has gone, noting that he has a personal wrestling coach, and has ‘a few special things planned’ for the show.

‘I have a personal wrestling coach and he’s teaching me all the right moves, The Warp Your Head Off Hold, the Stepover Toe Hold – all these things I’m gonna bring back.’

‘I wouldn’t wanna be Sami April 3rd. Or April 1st, May 1st, I would never wanna be Sami Zayn. I don’t think anybody would like to be that. Wake up and have to look in the mirror and see that face every day? Urgh!’

‘Oh, I got a few special things planned. I don’t wanna give it away,’ he coyly added. ‘But they said “anything goes” – that’s my specialty!’

Knoxville isn’t the only celebrity set to wrestle at WrestleMania, as Logan Paul is set to team with The Miz against Rey and Dominik Mysterio on WrestleMania Saturday. Paul recently gave a sneak peek at his wrestling gear for the show.