WWE is continuing to relax the brand split as Raw star Kevin Owens has been announced as appearing on tonight’s episode of SmackDown.

Kevin Owens has been on a crusade to uncover the truth about Ezekiel with his frustrations boiling over to the point of locking horns with Elias’ younger brother at Hell in a Cell.

Tonight, “The KO Show” rolls into SmackDown as the outspoken Superstar looks to air his grievances and convince a new audience to join his personal vendetta.

Who will be the special guest on tonight’s edition of “The KO Show,” and what fireworks are set to erupt on the always explosive talk show?

Cody Rhodes and Seth ‘Freakin’ Rollins will also be at the show, but it’s believed that’ll be for a dark match rather than appearing on TV. 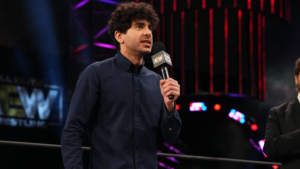 Also announced for the episode itself is a rematch between Raquel Rodriguez and SmackDown Women’s Champion Ronda Rousey. It’s being billed as a ‘Championship Contenders’ match, meaning if Rodriguez wins, she’ll earn a future shot at Rousey’s title.

The only other thing announced for the show as of this writing is the six-man tag with Sheamus, Ridge Holland and Butch – the Brawling Brutes – taking on Kofi Kingston, Xavier Woods, and a mystery partner.

We will of course have live coverage of SmackDown later tonight.