Following Taiji Ishimori’s IWGP Jr Heavyweight Title defence over Hiromu Takahashi, KUSHIDA made his entrance, confronting the champion, before stating that he wants to spend the rest of his wrestling career with NJPW.

NJPW has now confirmed that he will be in six-man tag action on the July 3 New Japan Road event. KUSHIDA will team with Hiroshi Tanahashi and Alex Zayne to face off against KENTA, Gedo and Taiji Ishimori of Bullet Club.

The bout will notably be KENTA’s return match too, following the former IWGP US Champion’s injury in his No DQ bout with Tanahashi at Wrestle Kingdom 16 in January. 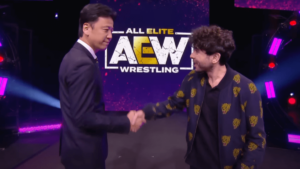 Hiroshi Tanahashi notably faced KUSHIDA in the star’s last NJPW match in January 2019, ahead of KUSHIDA signing with WWE.

Over 20 performers have left WWE this year so far. You can check out the full list of WWE departures in 2022 right here.

19 hours ago by Connel Rumsey