It has now been a month since The Undertaker entered the WWE Hall of Fame, delivering an iconic speech which saw him take a look at the man behind the legendary character.

Taker thanked many of his greatest friends and rivals throughout his career, but obviously with a career as long as his there would be some names he forgot to mention.

The most notable omission was Mick Foley, who had an iconic feud with the Deadman as Mankind in the 90’s. Mick’s daughter Noelle commented on the omission after the speech, saying:

“That was a great speech, but I’m very surprised there was not one single mention of my dad and their legendary matches together. Obviously I understand it’s difficult to fit everything into one speech and remember every single person you want to mention. But it just would have been really nice to hear my dad’s name mentioned.” 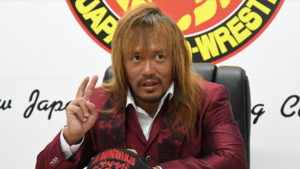 Foley himself was asked about his omission from Taker’s speech on the In The Kliq podcast, where he said that he wasn’t bothered by the omission, so people shouldn’t be bothered on his behalf.

“Well, listen, I forgot to mention my wife during my speech, so I’m not one to lecture anybody about who they should and should not include in their speech. I was not there in those formative years and his [speech] was more about friendship and support. We had a great rivalry, but he didn’t mention Rock or Austin, and he and Austin had some classics as well. So if I’m not hurt, no one can be hurt on behalf of me.”

John Cena Called Out By Mick Foley For Hilarious Reason

35 mins ago by Sanchez Taylor

Report: Several ‘Under The Radar’ AEW Agreements Have Expired

Kenny Omega Admits Recent Backstage Return Was ‘Too Much, Too Soon’