Mike Tyson Pulled Out Of ‘Roast Of Ric Flair’

6 months ago by Amanda Savage

A huge name and WWE Hall of Famer has just announced that they will be pulling out of the ‘Roast of Ric Flair’ in advance of his much advertised last match next month.

Ric Flair is doing somewhat of a professional wrestling farewell tour as he is marketing his upcoming bout at Starrcast V as “Ric Flair’s Last Match” however among the weekend’s festivities, a potentially very funny affair was announced.

The ‘Roast of Ric Flair’ was announced yesterday (June 14) to include WWE Hall of Famer and Flair cannabis collaborator, Mike Tyson as one of the participants.

However, according to a new report from TMZ Sports, Tyson is no longer expected to appear. 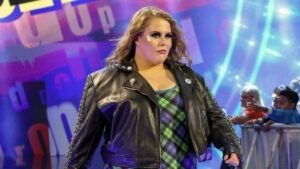 Doudrop Reacts To Being Compared To Nia Jax

According to TMZ, Tyson will no longer be attending per Tyson’s rep:

“Due to unforeseen circumstances Mike will not be participating in the roast.”

Per TMZ, reps for Tyson did not wish to elaborate further.

Diamond Dallas Page has also been announced as a confirmed legend participating in the Roast of Ric Flair.

The Roast of Ric Flair is being put on Starrcast V organizers who according to the initial report of Tyson signing on, are continuing to seek other celebrities and professional wrestling greats to join the panel to roast the Nature Boy ahead of his final match.

13 mins ago by Ryan Coogan

3 mins ago by Liam Winnard