When the world shut down back in 2020, WWE relocated to the Thunderdome, in a very unique and bizarre era of Raw and SmackDown, of which there were very few standout moments.

One of the most popular things to come from the Thunderdome Era was MVP’s Hurt Business stable, consisting of Bobby Lashley, Shelton Benjamin and Cedric Alexander. The group led Lashley to both United States and WWE Championship glory, as well as Shelton and Cedric to Raw Tag Team Championship glory.

The group was split up rather prematurely in the build up to Lashley’s match with Drew McIntyre at WrestleMania 37, with the mindset of the creative at the time being that they didn’t want the group to be cheered over McIntyre at the event. 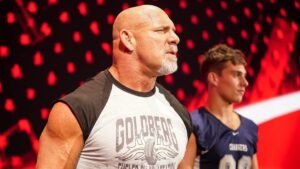 Goldberg Reflects On WWE Moment That Was A 'Dream Come True'

Ever since the group disbanded, fans have been speculating about a potential reunion of the group, which seems unlikely now that MVP is with Omos. They could of course form a new version of the group, but MVP doesn’t seem to like that idea.

When a fan asked MVP to reform the group with new members, he said:

New members? Then that would be a different group. That’s like Wu-Tang with “different members”. It ain’t the same.

MVP and Lashley split up on the Raw after WrestleMania, with MVP aligning with Omos, who has now returned to defeating local competitors on Raw.