Naomi has returned to Twitter and has re-tweeted about a new project for the first time since walking out of WWE in May.

Naomi may have not returned to WWE but she has returned to using her Twitter account when she shared a sweet message yesterday (June 19) for Father’s Day in honor of her husband, Jon.

Today Naomi hopped on to share a selfie today (June 20) and a caption that is simply a green heart.

In the snap, Naomi, real name Trinity Fatu, looks stunning with hair, makeup, nails, and of course, her beautiful and enormous diamond wedding set shimmered in the sunshine. 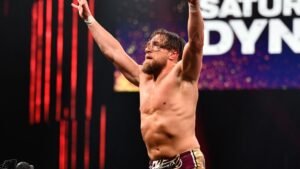 Trinity’s wedding to fellow WWE star Jimmy Uso (Jonathan Fatu) was featured on season two of the WWE reality show Total Divas, of which Naomi was an original cast member that aired on the E! network.

Perhaps she and her husband Jon will be making an appearance together on another E! series, as Naomi, also re-tweeted a fan account that posted that she would be featured on an upcoming episode of the Kevin Hart series, Celebrity Game Face.

Celebrity Game Face is a competition show where Kevin Hart hosts celebrity couples competing in a game night, originally airing during the lockdown era of the COVID-19 pandemic, the show featured celeb couples participating from home.

Naomi has been largely absent from social media since she shocked the world when she and fellow WWE star and Women’s Tag Team Champion, Sasha Banks, walked out of the company from a television taping of Monday Night Raw.

.@NaomiWWE will be featured on an episode of the upcoming season of Celebrity Game Face hosted by Kevin Hart. pic.twitter.com/OtHKkrKGvM