Since his first appearance in New Japan in 2015, Juice Robinson has become the star that many expected him to become in the hands of WWE.

Juice has gone on to become a mainstay of the NJPW roster, holding the IWGP United States Heavyweight Championship three times, and teaming with Dave Finlay to hold the IWGP Tag Team Championship and win the 2019 World Tag League.

Currently aligned with the Bullet Club, Robinson has clearly found his future and that future will continue to be NJPW.

With WWE bringing back some of its former wrestlers, including Bullet Club members Luke Gallows and Karl Anderson, a potential WWE return might have been a possibility for the former eco-warrior CJ Parker. 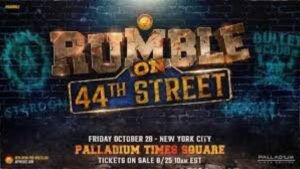 In an interview with Inside The Ropes, Juice clearly showed he has other ideas, saying:

“You know what they say in wrestling, ‘never say never, hahaha.’ But you know, my life, it seems to be going [in] a different direction now, so I would say…I don’t even think that I would be a person that they are looking to have there, I was already there, it didn’t really work, no problem.”

Juice is far from bitter about his time in WWE, but he has something of a pragmatic approach to his relationship with WWE, explaining:

Quotes from Inside The Ropes.