On tonight’s show, Toxic Attraction came to the ring and spoke about Roxanne Perez’s NXT Women’s Breakout Tournament contract, before Roxanne and Cora Jade came out and she teased cashing in the contract for a tag title shot alongside Cora.

Kayden Carter and Katana Chance then interrupted and staked their claim for the tag titles, before a brawl ensued between them and Jade and Perez. 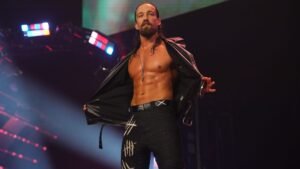 IWGP World Heavyweight Championship To Be Defended At Forbidden Door

WWE has now announced that Cora and Roxanne will face off against Kayden and Katana on next week’s show, with the winners advancing to NXT Great American Bash.

Also set for next week is a singles match between Sanga and Xyon Quinn.

Update On NXT Philosophy After Returning To ‘Black & Gold’