The viewership for the first episode of Dwayne ‘The Rock’ Johnson’s new wrestling series ‘Tales From The Territories’ has been revealed.

The series was created by Dark Side Of The Ring creators Jason Eisener & Evan Husney, with Dwayne ‘The Rock’ Johnson & Dany Garcia of Seven Bucks Productions credited as executive producers.

Similar to “Dark Side Of The Ring,” “Tales From The Territories” uses interviews and re-enactment to tell little-known stories from wrestling’s storied history. 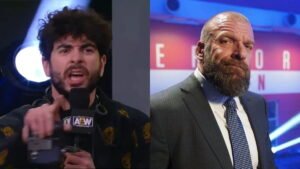 Tony Khan Reveals Truth About Why He Takes Shots At WWE

The first episode was titled “Memphis: Where Wrestling Was Real,” and followed the early days of Mid-South Coliseum Wrestling.

The second episode will continue the story of Memphis wrestling, and discuss the feud between comedian Andy Kaufman and Jerry “The King” Lawler.

Future episodes of the series will cover the Dallas, Texas territory, Stampede Wrestling, and more.

Jason Eisener recently provided an update on the future of “Dark Side Of The Ring”, which you can read more about right here.

For more information about wrestling television ratings, check out our ratings stats page.

Former WWE Star Would Love To Be Involved In Potential Roman Reigns Vs. The Rock Match

Update On Potential Royal Rumble 2023 Appearance For The Rock