The real reason why Michael Cole’s commentary was censored on WWE SmackDown has been revealed.

During Raquel Rodriguez’ match with Shotzi, Cole’s audio dropped when Rodriguez hit her Chingona Bomb for the victory.

Per Bryan Alvarez on the Bryan & Vinny Show, a line was censored as the move name was confused with an offensive phrase.

“There’s a famous saying in Spanish that many people know, I won’t say it here but I’ll say the English translation ‘F**k your mother’. So Raquel Gonzalez (Rodriguez) has a move called the Chingona Bomb and the word ‘Chingona’ is like a headstrong female.

“But I believe the folks at FOX heard Chingona Bomb and thought it was the F**k You Bomb or F**k Your Bomb or something like that. So every time she does this move and the announcers call it, they bleeped it on SmackDown Friday.” 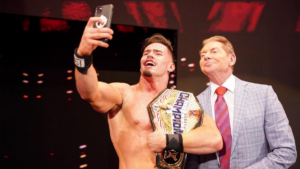 Also on the show, Michael Cole announced that Sasha Banks & Naomi had been suspended and stripped of their Women’s Tag Team Championship following their walkout.

Pat McAfee has explained his reaction to this ‘fascinating’ announcement, revealing what he knew before the show.