When New Japan Pro Wrestling (NJPW) announced the brackets for Best of the Super Juniors 2022, many were surprised to see that former NXT star Kushida wasn’t part of the line-up.

Kushida left WWE earlier this year after letting his contract expire on April 18, and reports were that he was planning a return to New Japan, where he wrestled for nearly 10 years before signing with WWE. 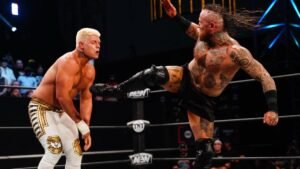 Malakai Black Thanks Cody Rhodes For Putting Him Over

As a 6-time IWGP Junior Heavyweight Champion, the tournament seemed like a perfect place for him to return, but as Dave Meltzer reports in the latest Wrestling Observer Newsletter, Kushida didn’t want to be classed as a junior heavyweight anymore.

“The tournament looks to be very strong for match quality, but it’s doubtful it can touch years past when Ospreay and Takagi were the top junior stars. It’s also notable no Kushida in the tournament. Kushida didn’t want to return and be classified as a junior heavyweight.”

Several of New Japan’s top junior heavyweights, including Hiromu Takahashi and Taiji Ishimori are part of the brackets, but arguably the most exciting inclusion in this year’s Best of the Super Juniors is AEW’s Wheeler Yuta, who is currently having a star making run in Tony Khan’s company.

The tournament will begin on May 15, and will run until the middle of June.

Kushida is one of many stars to leave WWE in 2022, and you can see every released star from this year right here.

24 mins ago by Ryan Coogan

14 mins ago by Liam Winnard