WWE Hall of Famer Ric Flair has provided clarification on his wrestling future, revealing whether he has any plans to return to the ring.

In July, Ric Flair teamed with Andrade El Idolo to face off against Jeff Jarrett & Jay Lethal in what was billed as ‘Ric Flair’s Last Match’.

Flair recently caused a stir after stating that Ricky Steamboat’s upcoming bout had inspired him to wrestle again.

Speaking on his To Be The Man podcast, Flair admitted that he wishes that his bout in July wasn’t presented as a retirement match. When asked whether he has any immediate plans to step back between the ropes, Flair said:

“None. When I say it inspires me to want to do it again…

“It’s not that I couldn’t, I will stand by this, I wish I hadn’t said it was my last match. But I don’t want to disappoint a bunch of fans by doing it again. But I got myself into good shape and then I you know, made one drastic, what turned out to be drastic mistake by not hydrating, but I feel great.

“I feel like as long as you’re healthy you want to do and you should do what you want to do when you get to an age. I mean, you know, we always will always be limiting ourselves or what things, I feel like we limit ourselves to what people think we should be doing sometimes as opposed to what we’re doing.” 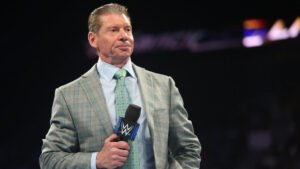 Seth Rollins Admits He ‘Got Emotional’ About Vince McMahon’s Departure

Flair also recently noted that he wanted to manage Andrade El Idolo in AEW, but indicated that Tony Khan was against the idea.

13 hours ago by Laura Cude

21 hours ago by Sanchez Taylor