WWE Stars Brawl After Raw Goes Off The Air (VIDEO)

Seth Rollins and Matt Riddle got into a heated brawl with one another after WWE Raw went off the air this Monday (October 3).

The two are scheduled to have a fight pit match at WWE’s upcoming Extreme Rules premium live event, which will be guest refereed by UFC Hall of Famer Daniel Cormier. 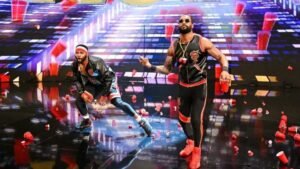 Footage captured at the event shows that after Monday’s episode went off the air, Seth Rollins came out to address the audience. He told them that while earlier in the night he had informed viewers that he and Riddle could not fight each other due to a clause in their Extreme Rules contract, the clause had now expired.

Matt Riddle them appeared and attacked the former WWE Champion. Rollins ultimately stood tall following the brawl, striking the back of Riddle’s neck.

Rollins also name-dropped former WWE official Jack Tunney Jr. in the promo, indicating that the executive (who passed away in 2004) had informed him of the clause’s expiration. This likely indicates that the segment is non-canon, unlike previous off-camera brawls between the two.

For more information about the win/loss records of WWE stars for 2022, check out WrestleTalk’s stats page.

21 hours ago by Liam Winnard

3 days ago by Ryan Coogan

11 mins ago by Sanchez Taylor

22 mins ago by Dave Adamson

37 mins ago by Sanchez Taylor

57 mins ago by Dave Adamson

43 mins ago by Dave Adamson