In a hilarious video, Roman Reigns is seen not only being the Head of the Table, but he also manages to be adorable at the same time!

Interacting with a very young fan in the audience, an IG video is being shared around social media which shows Roman Reigns at a house show, interacting with the tiny titan who doesn’t seem intimidated at all by Reigns, in fact, quite the opposite.

After the two-year-old fan clearly mean mugs Roman Reigns, he responds with a look at first of indignation before later in the match, making the same pout back to the adorable tot. 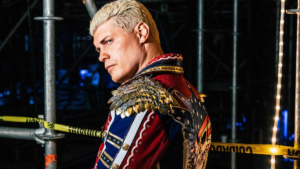 Meanwhile, Roman Reigns continues his reign as Undisputed WWE Champion after besting Brock Lesnar at WrestleMania 38 to capture both major championships for the company.

It has been subsequently much speculated on whether or not Reigns will be taking substantial time off during the summer months, with the latest reports that he continues to be booked for dates throughout the coming months without significant interruption to his television schedule, rather is taking time away from doing house shows.

25 mins ago by Amanda Savage