Ronda Rousey believes an unpopular WWE star does not get enough credit for having a really cool moveset.

The relationship between Ronda Rousey and the WWE fans is a complicated one, so it is always interesting to ask the former SmackDown Women’s Champion about other stars who are not popular among the audience.

Speaking on her YouTube channel, The Baddest Woman On The Planet discussed Baron Corbin and complimented him on having a really cool moveset. 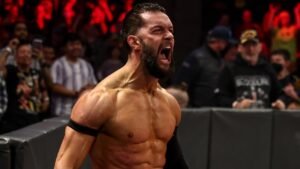 “But you know who I think has an amazing move set and like doesn’t get enough credit for how cool it is, Baron Corbin.”

Rousey went on to praise Corbin for his work as a heel in the company as well.

Baron Corbin, also known as Happy Corbin, hasn’t appeared on WWE television since the September 2 edition of SmackDown when he left the arena in JBL’s limo.

Meanwhile, Ronda Rousey will compete against Liv Morgan in an Extreme Rules Match for the SmackDown Women’s Championship at the Extreme Rules event on October 8.

Stay up to date with Rousey and Corbin’s win-loss records in WWE (for televised matches) at this link.