Both titleholders were in action on ‘WrestleMania SmackDown’, with US Champion Finn Balor competing in the Andre The Giant Memorial Battle Royal, and Ricochet defending his Intercontinental Championship against Angel and Humberto.

Speaking with Rick Ucchino of Bleav in Pro Wrestling, Sami Zayn noted that he doesn’t think leaving the titles off the WrestleMania card disrespects them.

Believing that sometimes the champion can just be the ‘odd man out’, Zayn said:

“I mean they’re titles. It’s not about the respect the title gets, it’s the performer that holds the title. For example, if Roman Reigns were the US Champ, don’t worry, that title is getting on the show. It has happened to I think where the title has ended up in the hands of a performer who, it’s always been a breakout title, who is on the verge of a breakout and sometimes it goes one way, and sometimes it goes the other.

Ricochet didn’t have a ton of television time going into his title. It makes sense that he got the title, which is great for him, but it’s at a weird time where it’s in the build to WrestleMania. I don’t think it’s a disrespect to the title itself. It’s just where the chips fall. Sometimes..that’s one of the things people don’t understand about being on the inside of WWE and how chaotic all of this is and how sometimes it’s not about the ‘the Intercontinental Title is not important, let’s dismiss it.’ Sometimes it’s just dominoes fall and you’re the odd man out. It happens to almost everybody.

Look at Seth Rollins, it actually turned into a storyline, which I think has been great, but the storyline almost played on a real-life thing where like the matches lined up this way and it was, ‘Oh my God, how is Seth left out?’ It totally has…I don’t think it’s a slight on the championships, it’s just circumstances. Let’s all just take a breath and calm down.” 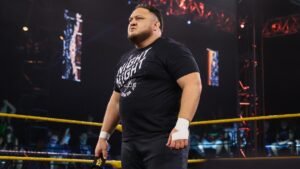 Zayn faces Johnny Knoxville in an Anything Goes match on Sunday.

60 mins ago by Amanda Savage