Sami Zayn has revealed the backstage reaction to him mentioning AEW on WWE Raw a few years back.

Speaking with Cultaholic Wrestling’s Tom Campbell, the WWE star was asked about mentioning AEW during the Electric Chair segment on the May 27, 2019 edition of WWE Raw and whether he received blowback backstage.

“Yes and no. It was the next day after AEW had their first-ever pay-per-view so it was a very hot topic at the time, and actually it was hot off the announcement that AEW was going to be a company and it was just so new and so fresh and we figured it was on the front of everybody’s minds. So I felt like it was bound to come up and it kind of weirdly didn’t.”

“Also at that point, some of the questions, I thought it was going to be a lot more provocative because it was unscripted. And while I was out there I felt that the questions were a little bit flat, to be honest. So me, using my judgement, I figured this needed some pizzazz and so I brought it up myself.”

“So I think that was the part that there was a little bit of a blowback to when I got back. It wasn’t so much that it came up. It was sort of the way it came up. The way I sort of addressed it when it wasn’t really needing to be addressed.” 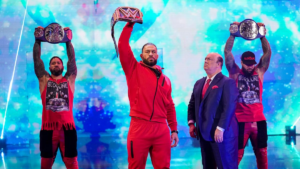 On the May 27, 2019 episode of WWE Raw, Sami Zayn debuted the Electric Chair segment, which featured him being asked unscripted questions by members of the audience in attendance, while he sat in an electric chair.

The episode took place two days after All Elite Wrestling’s first ever event, Double Or Nothing 2019.

Zayn explained in the interview that he feels his mentioning of the new promotion received the desired reaction:

“In my defence, the fact that we’re still talking about it three years later tells me my instincts were right because we needed something memorable to make this a kind of shocking segment…But unfortunately, that was the death blow of the Electric Chair segment.”

Sami Zayn will compete at WrestleMania 38 against Jackass star Johnny Knoxville in an Anything Goes Match on April 3.

For more information and details on WrestleMania 38, click here.