A popular wrestling legend has been announced for the upcoming MLW show in Philadelphia, Pennsylvania.

Major League Wrestling announced that former ECW World Champion Sandman will be making an appearance at their upcoming event on Friday May 13 at the former ECW Arena, now known as the 2300 Arena in Philadelphia. 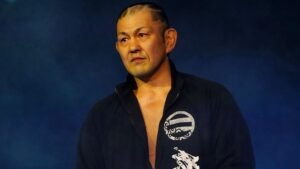 MLW released the following statement about his appearance:

MLW today announced the return of THE SANDMAN for Kings of Colosseum ’22 on Friday, May 13 at the 2300 Arena in Philadelphia, featuring an MLW Fusion TV taping.

As MLW celebrates the 20th anniversary of its first card, the league is welcoming several of its original roster back to where it all began, including “The Extreme Icon” The Sandman!

Debuting in MLW in 2003, the pool hall brawling, beer drinking, Singapore cane swinging Philly fighter waged war against the likes of Steve Corino, the Extreme Horsemen and Jerry “The King” Lawler throughout his extreme tour of Major League Wrestling.

From saving Terry Funk from a brutal beating in a no ropes barbed wire match to challenging for the Global Tag-Team Crown championship, The Sandman was one of MLW’s most popular wrestlers.

Throughout the nineties, The Sandman’s blood, sweat and beers fueled the rise of a revolution as the ECW Arena became one of the sport’s most infamous arenas.

Now the stage is set for The Sandman to enter it one more time on May 13th.

What will The Sandman do when he walks into the 2300 Arena? Find out Friday night, May 13 in Philadelphia at MLW Kings of Colosseum!

The May 13 event, Kings of Colosseum ’22, will mark the 20th Anniversary for MLW with the return of the Extreme Icon to the spiritual home of Extreme Championship Wrestling.

For more details and ticket information on the event, click here.

Update On Mance Warner Status With MLW Ahead Of AEW Debut

27 mins ago by Sanchez Taylor