Former WWE SmackDown Women’s Champion Sasha Banks has indicated that she may soon return to wrestling in the near future.

Banks has been absent from WWE, and wrestling in general, since she and fellow Women’s Tag Team Champion Naomi walked out of the May 16 taping of WWE Raw due to a creative dispute.

While the two have since been seen at a umber of high profile events in the interim, such as the premier of the Disney+ show She Hulk and as models at New York Fashion Week, there has been no concrete news that either of the two will make their return to WWE, or else go to another wrestling company.

However, Banks has now provided the strongest evidence yet that a wrestling return is in her near future.

The former WWE SmackDown Women’s Champion posted pictures to her Instagram story of her standing in a wrestling ring with her dog Ryu.

In one of the pictures, a large poster for WrestleMania 2000 can be seen in the background. 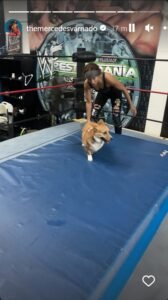 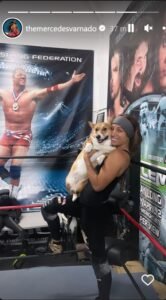 While there is no official word on if or when Banks will return to the world of wrestling, these pictures suggest that she is at least getting into ring shape.

Earlier today it was reported that Banks has trademarked her birth name Mercedes Varnado.

To stay on top of all the latest wrestling news, be sure to follow WrestleTalk on Twitter.

Returning WWE Star Declares For The Royal Rumble On SmackDown