An AEW champion has revealed the seemingly random way that Tony Khan paired them with their tag-team partner.

AEW has an exceptional TNT champion in the form of Scorpio Sky who defeated SammyGuevara to obtain and retain the title last month.

Now on AEW Unrestricted, Sky reveals the behind-the-scenes details of how he ended up being paired with All Ego Ethan Page and Dan Lambert in the first place.

Offering a fascinating insight into the backstage workings of creative at AEW, Sky shared how he came to be partnered with Ethan Page, saying:

“It was not long after the Revolution Pay-Per-View where he debuted. We were in Jacksonville. One of the people working with us comes up and says to Ethan and I, ‘Hey, I think we have an interview with you today.’

“We didn’t even really know each other. We had met maybe twice. Tony Khan calls Ethan and I into his office. We’re standing there, Tony looks at us and he goes, ‘Are you guys friends? Do you hang out?’ I’m like,’We’re cool.’ He said, ‘I think this could be something.’

“We clicked right away. I’ve never really had chemistry with someone so fast, and to his credit, Ethan Page is a phenomenal performer. 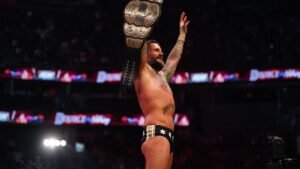 Sky also touched on being teamed up with Dan Lambert, sharing about the brash, on-screen bully:

“Working with Dan has been great. I know a lot of people don’t like him. He gets good heat, though.”

“He’s really really good at being an antagonist. He gets under people’s skin. He knows how to talk. He absolutely loves pro wrestling and it comes through in everything he does.”

Sky along with Page and the debuting Paige VanZant recently beat Sammy Guevara, Frankie Kazarian and Tay Conti in a match at AEW Double or Nothing with the stipulation if they lost as they did, Sammy and Frankie can never challenge Scorpio Sky for the TNT Championship again.