Following the conclusion of WWE Raw, Rollins came out to address the audience after the cameras had stopped rolling.

In footage of his off-air promo circulating on Twitter, Rollins can be heard saying:

“Earlier tonight, I came out to this ring, and Matt Riddle and myself had a ‘no contact’ clause.

“Well I have been informed by WWE official Jack Tunney Jr that that clause has officially expired!”

Jack Tunney Jr was a wrestling promoter who acted as the on-screen figurehead president of WWE from 1984 to 1995.

As “president,” Tunney oversaw the golden age of WWE’s Hulkamania boom and most of the company’s New Generation era. He would frequently make matches, and be referenced in wrestlers’ promos. 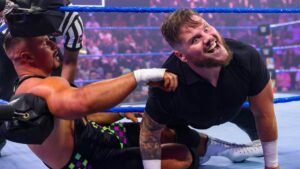 Following the promo, Matt Riddle came out to the ring and attacked Rollins.

Rollins put Riddle down with a strike to the back of the head, before conducting the audience who were singing a rendition of his entrance music.

Rollins and Riddle will face off in a fight pit bout at Extreme Rules. Check out the announced card for the October 8 premium live event right here.

21 hours ago by Liam Winnard

3 days ago by Ryan Coogan

22 mins ago by Dave Adamson

9 mins ago by Dave Adamson

47 mins ago by Dave Adamson