This November marks ten years since the trio known as The Shield first appeared on WWE television, when they interfered in the main event of Survivor Series to aid CM Punk against Ryback and John Cena.

Fast-forward a decade and the trio of Dean Ambrose, Seth Rollins and Roman Reigns are on top of the wrestling world. Ambrose, now Jon Moxley, is the current and three-time AEW World Champion, while Rollins and Reigns remain on top in WWE.

Despite Rollins being awarded multiple opportunities, Reigns has held the championship for over two years, and is the overall top face of WWE. 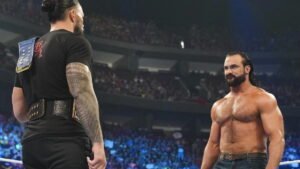 Sitting down with Ariel Helwani of BT Sport, Rollins spoke honestly about his thoughts on the company, and how he feels like he has never been ‘the guy’ in the company with Reigns being around.

“Even when I had won the title at WrestleMania, cashed in. Great moment. I still felt like I was second fiddle to Roman [Reigns]. I still felt like, ‘he was the guy, you’re the placeholder until he’s totally ready and we’re totally ready to put the ball in his hands. But for now you’re a step ahead, so we’re gonna give you this and then we’ll move on to what we really want to be, it’s just gonna take a few months’. So no, I’ve never ever felt like, in my time in WWE, that the company was like ‘yep, he’s our guy, put his face on everything’.”

Helwani then asked Rollins if he feels like he is close to getting to that point in WWE, to which Rollins responded:

“I don’t know man. I wonder often if because I live in the Roman era that’s just never gonna happen. The only time I was even considered, I think, for the main event of WrestleMania, [was when] Roman, when he got Leukaemia, and he was out from August to January, February whatever it was, and I was second behind in the babyface column, so I got slotted in. So, I feel like, it’s one of those things. The best I can hope for is to be the Edge to his [John] Cena, the [Randy] Savage to his [Hulk] Hogan. Sometimes I just feel like that’s just the way the cookie crumbles. Doesn’t mean that I don’t think I’m better than he is, or that I can perform or I can draw at that level, I certainly think all those things, but it’s not my sandbox, I don’t make those decisions.”

Rollins is set to take part in a Fight Pit match against Matt Riddle at the upcoming WWE Extreme Rules event, while Reigns’ next defence is set for November 5 at WWE Crown Jewel against Logan Paul.