Former WWE Chairman and CEO Vince McMahon announced his decision to retire on July 22. Stephanie McMahon and Nick Khan were subsequently named co-CEOs, while Triple H became the head of creative on July 25.

Since then, the company has brought back released stars from the previous regime and have seemingly changed their mindset when it comes to talent acquistion.

AEW President Tony Khan has proven to be very knowledgeable about professional wrestling and has never been shy to talk about his company’s biggest competitor.

Speaking with Ariel Helwani, Khan was asked to share his thoughts about the regime change. 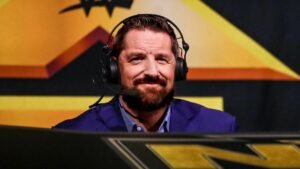 “Yeah, that kind of was how I felt. I definitely am always up for the challenge, and I think there have been elements that have seen a big improvement there, and I’ve been open to say that. I think there’s been a lot of improvements there. I definitely think for us, we’ve had a lot of big improvements too in recent weeks. I think we’re both very competitive and we’ve been very competitive in the past obviously. I think in this case now it’s hopefully gonna be good for everybody.”

Khan continued on to explain why he believes the two companies are now looking for similar things in free agents, saying:

“There’s probably a bit more similarity in what we’re looking for in terms of the profile of a free agent, which I think is already gonna start being a thing. I think we’re looking at more similar people. There was definitely something happening this year, where there were wrestlers being released that came here, that I definitely believe belong on national television, worldwide television, that are huge stars in AEW. Some of those people I think would have made sense, and I don’t think, if there hasn’t been a switch in the person who makes that call, not sure many of those people would have been released. I think the benefit of that was for AEW because there’s some really good names, including some I’ve mentioned that have come over this year that we’re very fortunate to get. So there may be more similarity in some of the people we’re looking at, just based on what I’ve seen.”

As previously noted, Tony Khan also revealed that he spoke with WWE management after his infamous promo addressing Nick Khan.

Stay up to date with the AEW roster’s win-loss record (for televised matches) at this link.

57 seconds ago by Ryan Coogan

40 mins ago by Ryan Coogan