While AEW prides itself in providing creative freedom, that isn’t the same as creative control which remains firmly in the grasp of Head of Creative, Tony Khan.

Tony Khan, who is also President and CEO of All Elite Wrestling has the final say in a variety of matters big and small, including reviewing Max Caster of the Acclaimed’s raps before he heads to the ring, according to Tony Schiavone.

Schiavone was recently on the Rob Brown Show where he discussed amongst other things, what AEW stars made him most nervous when they were on the mic.

“With MJF, I am, because he has a tendency to be out of line. Max Caster, no, because that’s pretty much been put under wraps. Tony (Khan) has to approve what the rap is now. That’s burned him. I don’t know what he said one time, I can’t remember exactly what he said, but he got suspended because of a rap one time. 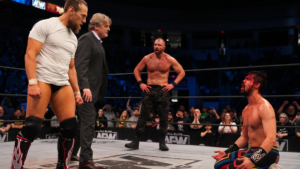 Schiavone went on to describe why MJF continues to concern him on the mic, saying:

MJF is like, well he’s out of his mind. They were chanting one night about his religion, being Jewish, and he said something about Jesus Christ. When he said it, I remember thinking, ‘He is out of his freaking mind.’ I went backstage and I went, ‘why would you say something like that?’ He said, ‘Did you hear what they were chanting about me and my religion?’ ‘Yeah, but stop.’ He concerns me.”

Max Caster has featured in some high-profile matches as of late on AEW Dynamite including taking on CM Punk and most recently, on last week’s edition of AEW Dynamite against Samoa Joe for his in-ring debut for AEW.

Samoa Joe beat Caster to set his record as 1-0. You can view the win/loss record for the entire AEW roster by clicking here.

56 mins ago by Amanda Savage

Where Was Hangman Adam Page When CM Punk Called Him Out On AEW Dynamite?