On the September 28 edition of Dynamite, Bandido unsuccessfully challenged for Chris Jericho’s ROH World Title. It was reported after the bout that AEW was interested in working with Bandido again, and had offered the luchador a full-time AEW contract.

Per Fightful Select (subscription required), Bandido has now agreed to terms with AEW.

The report also noted that a number of backstage names spoke highly of the Mexican star’s attitude surrounding his short notice booking. Per Fightful, Bandido hugged Tony Khan after the match, and appeared visibly excited.

Bandido has been a standout performer on the world independent scene for over a decade, notably holding gold for ROH, PWG, PROGRESS and more. 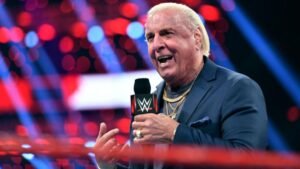 AEW recently signed RUSH to a full-time deal. RUSH, who debuted for AEW in May, notably dropped the ROH World Championship to Bandido in July 2021.

Bandido was originally meant to defend the gold against Jonathan Gresham at Final Battle 2021, before the promotion’s hiatus, but couldn’t compete due to COVID-19 precautions, so instead, Jonathan Gresham faced Jay Lethal for the interim ROH World Title.

Chris Jericho currently holds the ROH World Title, and has vowed to defeat every former champion to desecrate the legacy of the promotion.

Stay up to date with every title change in AEW using our tracker at this link.