Drew McIntyre and Roman Reigns main evented the first WWE stadium show in the United Kingdom in over 30 years back on September 4, when WWE brought Clash at the Castle to Principality Stadium in Cardiff, Wales.

The main event saw McIntyre come up short in his quest to take the Undisputed WWE Universal Championship from Roman Reigns thanks to interference from Solo Sikoa, who made his WWE main roster debut on the show, helping Reigns retain.

However, McIntyre still has his sights set on the Bloodline. Speaking to the Dallas Morning News, McIntyre said that he would go through the entire Bloodline to get the title off of Roman, including Solo, the ‘elders’ who ordered Solo to join the Bloodline, as well as The Rock himself. 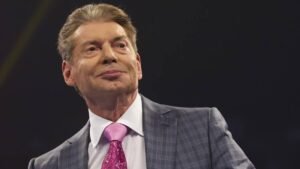 “Apparently, I’ll have to go through not just The Bloodline – because I did that prior to Clash at the Castle – then the elders and a new member [Solo Sikoa]. I’m going to have to literally go through the entire family like door to door. And I like The Rock a lot. It’s gonna pain me deeply when I go through the entire family, have to go to Hollywood, tap The Rock’s door and say, ‘I’m sorry, brother,’ then beat them him in his own doorstep because it’s the only way I’m gonna get that title off Roman.”

Many people believe that The Rock is set to face off with Roman Reigns at WrestleMania 39 in Los Angeles next year.

McIntyre is set to go one on one with Karrion Kross in a strap match at the Extreme Rules premium live event next weekend, while Reigns’ next defence is set against Logan Paul at WWE Crown Jewel in Saudi Arabia on November 5.

12 mins ago by Ryan Coogan