Seth Rollins has been rocking with the official ring name of ‘Seth ‘Freakin’ Rollins’ since late last year, with Vince McMahon making the change to his presentation.

After Vince McMahon retired from WWE back in July, there have been several WWE stars who have had their ring names changed, such as Matt Riddle, Austin Theory and Tommaso Ciampa receiving their first names back.

We may be set to see the official Seth ‘Freakin’ Rollins ring name disappear soon, but that won’t be an idea that will have come from the mind of the new head of creative. 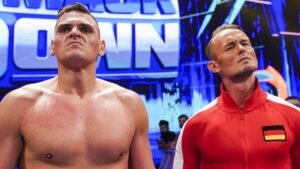 Seth recently sat down with Ariel Helwani of BT Sport, where he spoke about a conversation he had with Vince McMahon prior to his retirement about changing his name as not to ‘scare off’ any fans.

“So even before Triple H took over, this was weeks before, I think, maybe months even. I had gone to Vince specifically because I had watched something back on Raw and maybe it was like a highlight on Twitter, and they just they said ‘Seth Freaking Rollins’, it had been a dozen times in 30 seconds because Vince was also very big on not using pronouns. So, constantly, he wanted the whole brand [said] every single time I was referenced and I’m like, ‘You gotta stop that. You’re gonna turn people off. That’s not what we want, you know?’ So he was like, ‘Okay. On the commentary, they can refer to you as Seth Rollins.’ I was like, ‘Alright, thank you.’ So I don’t know,” he continued. “I don’t know if ‘Freakin” is staying or going. I’ve had many, many names and it’s all fine with me. It’s different. No one’s really working with a strong middle name right now. There aren’t any Bret ‘The Hitman’ Harts, you know?”

Seth is set to enter the Fight Pit in it’s first outing on the WWE main roster at the upcoming Extreme Rules event, where he will take on Matt Riddle inside the cage.

5 days ago by Dave Adamson