A new tag team has been confirmed to have signed with All Elite Wrestling and be part of the Ring of Honor roster.

Per Fightful Select (subscription required), former Shane Taylor Promotions member Kaun has signed with AEW and will be a part of the ROH roster.

Speaking with Koffin Radio, Kaun’s tag team partner Toa Liona also confirmed that he has indeed signed and will be a part of the ROH roster moving forward as well. 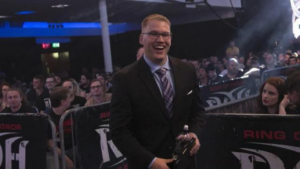 When asked if he was with AEW, Liona said:

“It’s official, I’m signed with them. I’m part of the ROH roster, but, I’m contracted so you never know when I might pop up on TBS or TNT. Watch Dynamite and Rampage.”

The Gates of Agony member revealed that the plan was in the works after his appearances on AEW Dark, saying:

“After all the Dark tapings, I had a conversation with Tony (Khan) and he pretty much said, ‘stay ready.’ I got my gear, had a conversation with Kaun, and we have the same type of mindset. We’re both…we love to grind, we love to work hard, and we both want to be the best to ever do it. It was the perfect partnership for me and him to be put together. When that happened, we just had to stay ready and when we got that phone call, you get that opportunity, you have to get ready to hit it out of the park.”

The Gates of Agony defeated Shinobi Shadow Squad (Cheeseburger and Eli Isom) in quick fashion on the Supercard of Honor pre-show.

Tully Blanchard also announced former FTW Champion Brian Cage as a member of Tully Blanchard Enterprises prior to his victory over Ninja Mack on ROH Supercard of Honor.

49 mins ago by Liam Winnard

59 mins ago by Ryan Coogan