During the taping, which took place following Dynamite: Grand Slam on September 21, Wardlow teamed with Samoa Joe to face off against Tony Nese & Josh Woods.

On the latest edition of Wrestling Observer Radio, Dave Meltzer noted that Wardlow “appeared to have a leg injury, but he did come back.”

Meltzer clarified that the extent of Wardlow’s injury is currently unclear. 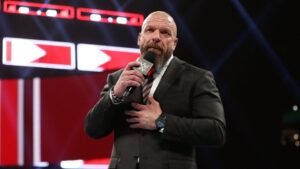 Triple H Was Threatened To Be Fired By WWE

Wardlow won the TNT Championship from Scorpio Sky in July. He has defended the gold on four occasions, most recently against Tony Nese on the September 7 edition of Dynamite.

Following this bout, Wardlow teased a character change, which he has since discussed.

The TNT Champion was recently added to the poster for AEW’s November pay-per-view Full Gear. At All Out, Wardlow competed in tag action, teaming with FTR to battle the team of the Motor City Machine Guns & Jay Lethal.

Stay up to date with every AEW title change of 2022 using our tracker right here, and win/loss records for 2022 at this link.

21 hours ago by Connel Rumsey