UPDATE: Cody Rhodes has seemingly confirmed the match will be going ahead as planned – read more here.

WWE announced an injury to Cody Rhodes at a recent live event, leading to uncertainty surrounding a top match advertised for tonight’s Hell in a Cell premium live event.

Rhodes and Rollins were slated to face off during last night’s Saturday Night’s Main Event house show. Before the bout, it was noted that Rhodes was injured, and that Drew McIntyre would be facing Rollins during the live event instead.

McIntyre ultimately defeated Rollins, before Rhodes came out and had a post-match segment with his rival.

Rhodes and Rollins are set to clash in a Hell in a Cell match at tonight’s Premium Live Event. As of writing, aside from at the untelevised live event, WWE hasn’t publicly announced an injury to Rhodes, and is still advertising the Hell in a Cell match-up. 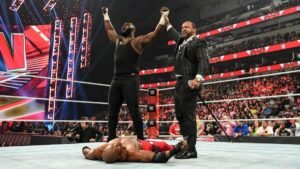 VIDEO: MVP Drops Diss Track On Bobby Lashley Ahead Of WWE Hell In A Cell

It has been speculated that the ‘injury’ is very minor, and that WWE kept Rhodes from competing at the house show to make sure he is as healthy as possible heading into his Hell in a Cell match.

Stay up to date with WWE TV win/loss records for 2022 using our tracker at this link.

Seth Rollins Admits He ‘Got Emotional’ About Vince McMahon’s Departure

WWE Stars Brawl After Raw Goes Off The Air (VIDEO)

42 mins ago by Sanchez Taylor