According to the United States Patent & Trademark Office (USPTO), WWE has filed for a new trademark.

On May 12, WWE applied to trademark the term ‘BLOODY BRUTES’. WWE intends to use the term, seemingly a new team name, under the category of ‘entertainment services, namely wrestling exhibitions’ per the USPTO report.

The following description accompanied the filing: 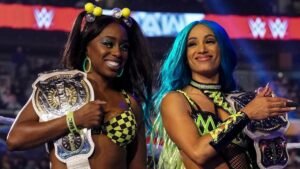 It is currently unclear specifically how WWE plans to use this name, or who it will be for.

The filing seems bizarre with modern WWE strictly against the intentional use of blood on-screen, with few exceptions. Former WWE Champion Bryan Danielson notably told Vince McMahon that he was leaving the company because he wanted to be able to bleed.

It has been theorised that the group of Sheamus, Ridge Holland and Butch could be referred to as the ‘Bloody Brutes’ moving forward, with ‘bloody’ being a slang term used in the UK. Tea and crumpets.

Stay up to date with every WWE trademark filing of 2022 using our tracker at this link.